Our last day of racing for the season :(

As expected with a northerly, very shifty conditions also challenged the six boats who went out to race. PRO Hugh Balloch, and his RC did a fantastic job in these conditions getting three races in... A W2, a D1 and a W1 1/2.

For the day, winning all three races was team 506 with Scott MacLeod, TK, Chris Daley and Buck (Do-Rag) Daley.

Second through fourth was decided by one point!

We had a tie-breaker for third, both with 10 points, between Team Horden (781) with Bahar Gidwani, Yalcin Tarhan, Tony Ramos and Chris Vargas and team 619 with team 619 winning the tie-breaker on the strength of a second place finish in the first race. Team 619 was Lee Morrison, Susan Morrison, Mark Sullivan and Don Vasta.

At the beginning of the year, due to the scheduled demolition of our club house this fall creating a shortened season, we decided to have just one series and award trophies to the top five boats.

Here are the overall results with each team's core players...

5TH PLACE goes to Team 454 with Ed Sweeney, Art Collins, Alec Wiggin and Leo Schlinkert with a score of .8000

3RD PLACE goes to Team 619 with Lee Morrison, Susan Morrison, Don Vasta and Mark Sullivan with a score of .8726

And after 17 race days, with 40 overall races, in which they sailed in 37, including 21 wins and 5 second place finishes, it's no surprise the WINNING TEAM FOR 2016 is 506 with Scott MacLeod, TK and Chris Daley, often joined by Commodore Peggy Hersam. Their final score is an amazing .9851

As always, full results can be found here: http://www.fleet1.org/

The NA's this coming weekend. This year's regatta is being hosted by the Manhasset Bay Yacht Club. Racing is scheduled for September 30 - October 2.

The are currently 18 boats registered with verbal commitments from several more.

Online registration is still open and available at http://www.sonar.org/

Last day of racing: Sunday September 25 was our last day of racing. If you are keeping your boat in the Noroton parking lot, and plan to have Ed Morgan shrink wrap it for you, please take your mast down as soon as possible to allow him to take care of it before haul out.

After eight years as the Sonar Fleet 1 captain, I've decided to pass the baton. Next year's captain will be John Bainton, someone I know will do a great job with a ton of energy and enthusiasm.

Something I wasn't expecting but is HUGELY appreciated is this gift of a cutting board given to me by the fleet... 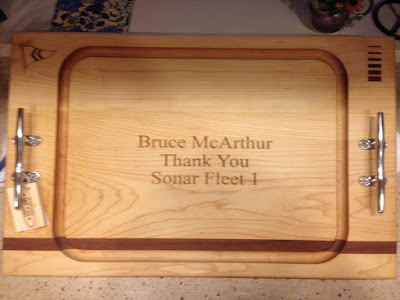 Thank you all so much.